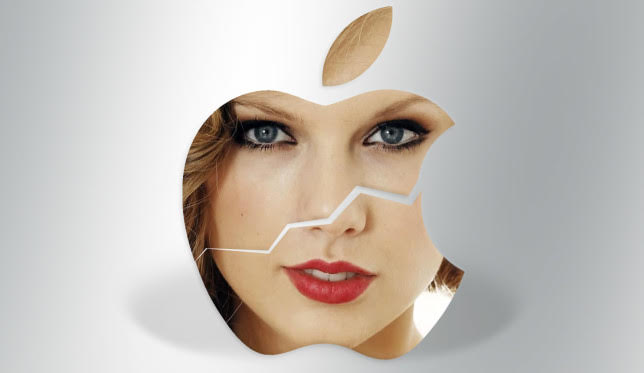 Whether you’re #TeamTaylor or not, the issue of fair royalties is still a topic worth discussing.

The battle turned love story between Taylor Swift and Apple Music on Monday regarding the company’s policy to withhold royalties from artists during the three-month free trial has quickly trended. Swift spoke out against the company saying, “It is unfair to ask anyone to work for nothing.”

One tweet and much backlash later, Apple changed its policy announcing, “#AppleMusic will pay artist for streaming, even during customer’s free trial period,” via senior vice president Eddy Cue.

#AppleMusic will pay artist for streaming, even during customer’s free trial period

We hear you @taylorswift13 and indie artists. Love, Apple

I am elated and relieved. Thank you for your words of support today. They listened to us.

Following Apple’s policy change, Twitter users rejoiced, claiming Swift has changed music history. While we don’t disclaim this statement, we do question if progress has really been made for artists.

While some people are praising Apple for agreeing to pay artists royalties during their free trial period, others are pointing out that they should have been paying royalties all along and that no applause is needed for doing what they should have done in the first place. Our view is that of course the artists should be paid their full royalties during any free trial period. This is Apple's streaming service and they are responsible for all of its operational costs and customer acquisition costs. Artist royalties are part of those costs. If a restaurant wanted to attract customers by offering free Coca-Cola, they would still have to pay Coca-Cola for their supply. This is no different.

Apple also conveniently re-positioned itself from “the bad guy” when the company changed its policy to pay 71.5 percent of Apple Music's subscription revenue to music owners. This is only 1.5 percent higher than other streaming services including Pandora and Spotify. So, while artists are being fairly compensated, Apple is closely sticking to the industry norm. Apple does of course, have the potential to really be the “progressive and generous company” as Swift claimed in her letter when it comes to Apple Music. For such a trend-setting company, we look forward to how they will push the industry standard for artist compensation.

We won’t argue that this is a major moment in the streaming service industry and a feat for artists, considering Apple’s tendency to hold its ground as a major industry influencer. However, we do hope that the indie artists and less-known musicians who did and continue to speak out will be taken seriously as well. We view this recent episode as a great step for Apple to acknowledge the point of view of artists so they can take it into account as they continue to develop Apple music. We think Apple will truly live up to the praise it receives.