Here are 5 ways to promote your music using social media.

To get started, you will need to first get followers to even read your content in the first place. This should be a combination of people you already know (your family, friends, and fans) and other users on the platform that post content similar to yours. Simply following and tweeting at them should usually be enough to get a follow back. Keep in mind that some of the larger influencers will not to this, so aim for accounts with an even ratio of following to followers.

You should read this article: Who is a Fan and how to Achieve Fan Loyalty

You may feel the urge to constantly post links to your music, but keep in mind that it may appear to some of your followers as spam and too self-promotional. Just as you would not like to hear the same song over and over on the radio, your followers do not want to see repetitive content from you.

At the same time, you still want to post your music often enough to ensure that it is seen and listened to. One way to balance this is to create a story around the link you post. Here are some examples:

The very first time you post a new song – Hi everyone, we have been in the studio for the last couple of months and are proud to finally release our new single. Check out it out here!

After your song is out and you have reached a certain milestone – Thank you to all of our fans, we appreciate the support. We finally reached 10,000 plays. If you haven’t already, listen here and see what you have been missing!

You are planning a live concert (throw in hashtags related to the venue for an extra boost) – Don’t forget we are performing Sunday night at #WebsterHall! We will be playing this track in addition to some new unreleased material!

There are many variations and creative ways to share your music in a way that is not over-intrusive.

You should also read this article: 3 Tips to use Twitter Effectively as a Musician

With the success of Instagram, it is no secret that people love to see photos and videos. Adding pictures of your album artwork, head shots, photos and videos of you performing live, snippets of your music video, or any other type of media is sure to get you much higher engagement.

Additionally, in-line with Feature.fm’s own philosophy in our approach to 'New Radio Promotion,' the best way promote your music is to play it to people. Take advantage of the various features on Twitter/Instagram. For example, Twitter has a feature where <a href="https://blog.twitter.com/2014/introducing-a-new-audio-experience-on-twitter"someone can listen to a SoundCloud link while still browsing their feed. 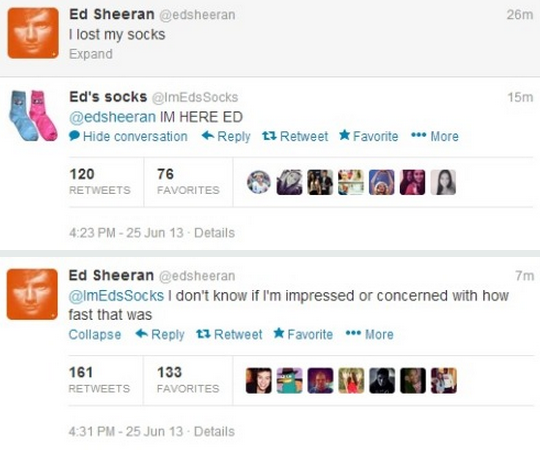 If you take a look at the accounts of some of the biggest artists in your genre, you will see hundreds of thousands to millions of followers and a constant stream of people tweeting at them and commenting on their photos. Do not let this discourage you from being a part of that group.

If you remixed a popular EDM track, or did a great cover of your favorite band, share it with the original artist. You will be surprised how often they listen. Think – they were once fighting to get exposure themselves and more likely than not they will relate to you and give you a shot. Just make sure that you are fully confident in the song you share.

Also, comments on their posts are highly visible and will be seen by many of their followers. If your reply/comment is interesting enough, you will get a lot of traffic to your page.

Engage with everyone that comes to you

After you have followers, your main effort should shift towards getting your page and content discovered by new people. However, you shouldn’t forget about your current fan-base. Personally reply to every single fan that comments on your posts, tweets about you, and replies to your own tweets. Wouldn’t you be excited if your favorite artist replied to you?

Have any other ideas or strategies for using Social Media effectively?