There is plenty of advice out there on how to get by on tour. Some directed towards tours where it’s seven guys who haven’t showered in a week packed into an overcrowded van. [If you’re those guys, baby-wipes and dry shampoo, bro! You can thank me later… Or anyone who gets near you can thank me later.] Some directed towards artists who are traveling in a glamorous tour bus, but still sleep in hotels. Everyone has something to say, but as someone who has done the tour life, I actually found these Ten Rules Of The Road (And Of Your Life) by 40-year veteran of the industry, Larry Butler the most helpful.

1. Assume nothing – call ahead. “Frequently. Just because your plane is scheduled to leave at noon, that doesn’t mean that it’s actually going to leave at noon. Just because the morning hotel desk clerk assured you of a late check-out, that doesn’t mean that the afternoon clerk knows anything about it (and, of course, the hotel manager is gone for the day). And when the people you call get irritated at your insistence on double-checking, you should calmly suggest a few ways in which their lives could be improved by the addition of this rule.“

From my experience: I couldn’t have said it better myself. Always have everything spelled out and reconfirm… constantly. I once worked a tour as a merch guy as a favor to a friend who, at the last minute, couldn’t do the tour. What she told me was a one week tour turned out to be closer to two weeks… And still getting paid the same flat fee for the tour. Moral being: even if it’s friends telling you something, make sure for yourself.

From my experience: I’ve done tours where it’s literally fall asleep in one state, wake up in the next. When you are on such a tight schedule to get to the next venue, you usually don’t have time to stop anywhere unless you’re getting gas. I found that the best tour food meant the healthiest food you can get… Though the healthiest gas station food isn’t exactly saying much. My saviors were beef jerky for my protein, a V8 for my vegetables, and gummy multi-vitamins because I don’t completely trust V8’s.

3. Sleep whenever you can. “That’s the other reason people burn out on the road is that they don’t sleep enough, if at all. If there’s a place to lie down and you have 20 minutes available, lie down, close your eyes and rest. Trust me – you’re not going to miss anything. In any event: sleep is the key.”

From my experience: Call me boring if you want, but to me, touring is business. Our hours are sporadic enough as is without the complications of trying to party on the road every night. Save the partying for special nights when it’s actually worth it, and make sure to get your naps in. I remember pulling into the venue at 1pm, setting up and sound checking, then having from 4pm to 6pm usually free. If the venue wasn’t providing catering, that was my naptime because at 6, I was usually working until bus call at 2am.

4. Get a moderate amount of exercise every day. “No need to run five miles or cross train, just a good walk will do. Walking downstairs to the hotel bar is not exercise, unless you are able to walk back upstairs afterwards. It’s never happened yet.”

From my experience: I am a fitness junkie, and I always brought my jump rope on tour with me. There is only one problem with this. With a decent workout comes a decent amount of sweat, meaning sweaty, smelly clothes and a sweaty, smelly you. How I got around that is I’d schedule my workouts on a weekly basis based around days that I could shower, wash clothes, and actually had time in my schedule to. It’s a bit ambitious to try to exercise every day on low budget tours, but still, aim to do something that keeps your body active and your blood flowing.

5. Always have your own transportation or an alternative to whatever transportation you’re in. “Never ride with someone else if you have your own car; make them ride with you. Never go anywhere if there’s no taxi/Uber/Lyft available to take you back. If you do not follow this rule, you will be stranded at a low class strip bar in The Middle Of Nowhere, Texas at 3 am with no way out. It happened to me; it could easily happen to you.”

From my experience: In general, I’d say don’t venture too, too far from your bus or van or whatever mode of transportation you are traveling in. Especially if you are in a city you aren’t familiar with. It just makes your life easier. I usually try to stay somewhat within walking distance.

6. Never take anything even moderately illegal across international borders (or, in some cases, state lines). “These days, there is plenty of whatever you want on the other side.”

From my experience: This is so straightforward and so true. I’m friends with several bands who have learned this the hard way, and they spent a few days of their tour in jail and throw away a lot of their money on bail. Also, I’ll take it one step further and mention as well; don’t get into fights while you are on tour. Not only can you get injured, but if you get arrested, your tour is screwed, and with our judicial system, it’s not necessarily about what happened as much as what you can prove. The laws in each city and state aren’t exactly the same, so that can really mess up your tour.

From my experience: These are very hit or miss. Usually you will find foreigners who want to play tourist, but on the rare occasion, you’ll find people who want to feel like locals and will embrace a spontaneous experience like this.

8. If you’re under 25, never make any important decisions on your own – ask an adult. “Here’s why: According to Frances Jensen, a pediatric neurologist at Children’s Hospital in Boston, a crucial part of the brain – the frontal lobe (where such things as planning and consequences of actions lie) – doesn’t fully connect until about age 25. Anyone younger than that does not have the ability to completely think about the effects of their behavior on themselves or other people; those attributes require insight and a fully connected frontal lobe. That would explain those surly, rude and selfish musicians who suddenly become professional once they turn 25 (and start receiving some publishing money). If you’re under 25, you might even play this to your own advantage. Just don’t try to think about it.”

From my experience: I was always the baby on all my tours and I’m currently 25 now, so I can’t really be objective on the subject. What I can say though, never make any important decision on your own – ask the tour manager.

From my experience: Most musicians are terrible at budgeting, and tour budgets are definitely no exceptions from this rule. One of the biggest problems that bands have with this is they don’t keep track of their expenses, and then at the end of the tour, they wonder why they are so far in the red. One of the best tours I ever did, the guitarist was also a finance guy. They had an excel spreadsheet expense report where everything down to food and gas was logged. That level of professionalism made their lives a lot easier, not to mention, profitable at the end of the tour.

10. Nothing is ever definite until after it happens. “No explanation needed for this one, is there?”

From my experience: This is number one for me because on every tour I’ve ever been on, there is always at least one hiccup. Just the other day, my friends’ band was supposed to leave for tour, and I watched their bass player panicking in my apartment because the company they were renting their tour van from decided not to accept the guitarist’s car insurance. These types of things will always happen. No tour will ever go completely according to plan. A few years back, I was on tour as a guitar tech, and we had 24 hours between shows to drive down from New York to our next show in Kentucky. On the way, we hit black ice, spun out, and our trailer with all the gear went flying and got totaled. For a lot of people, that would mean the end of the tour or at least missing that next show. What makes a professional on tour is how you deal with these unexpected problems. They didn’t let almost dying stop them, they went straight to U-Haul, rented a new trailer, and made it to the next show on time. Always, always expect the unexpected on tour. That is my number one rule. 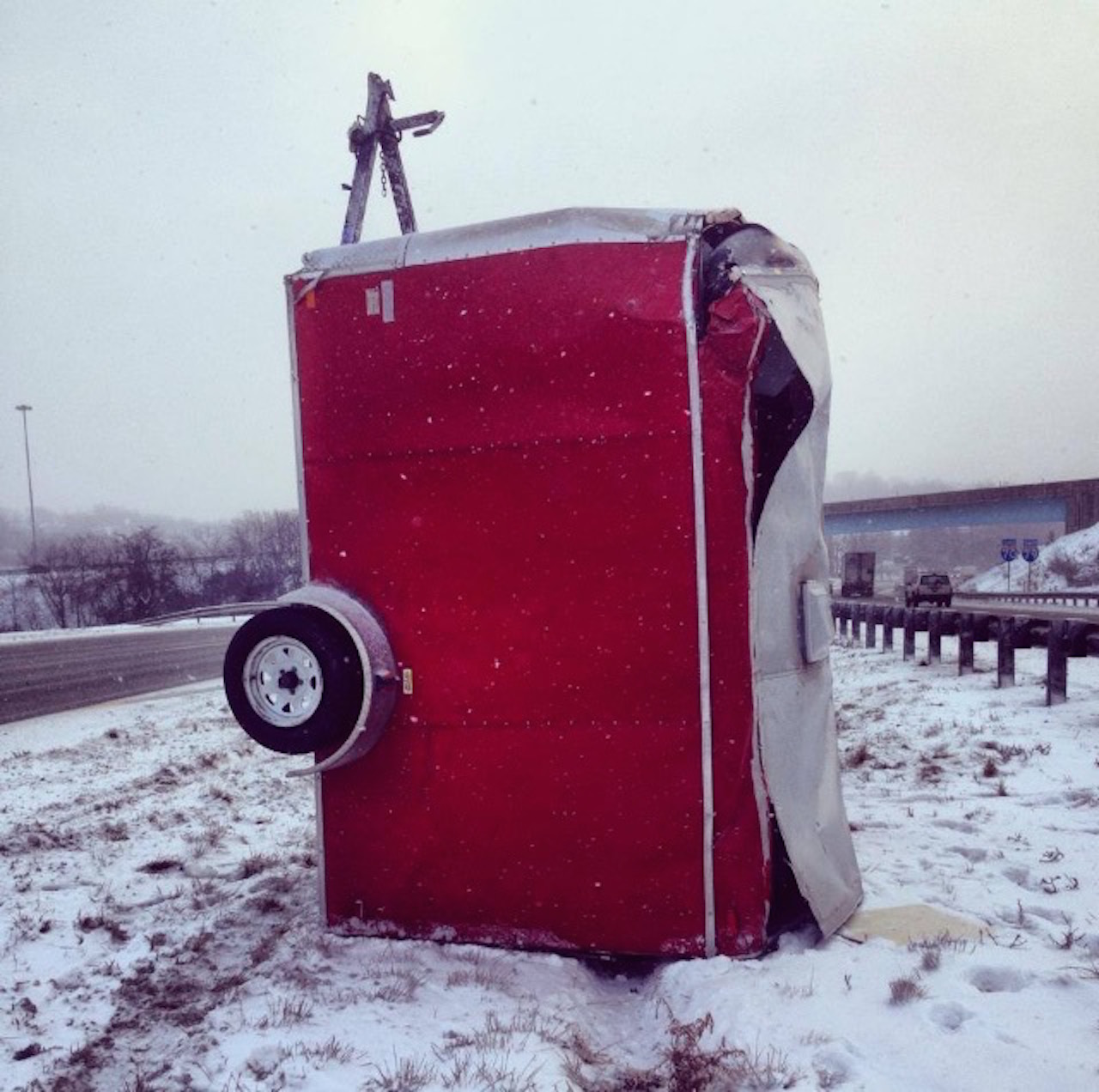 All in all, I’ve had some of the best times of my life on tour, and it will always be the best way to truly connect with your fans. Now, go out and make some memories for yourself, and make sure to check out The Ten Rules Of The Road (And Of Your Life) by Larry Butler for a few interesting extra side notes.