Artist, "Word Of Mouth" is doing something pretty interesting this year for record store day. They've let loose a Vinyl Campaign, hitting a bunch of record stores, giving away 1000 vinyl copies of their most recent release. Yes, you read that correctly. They're carrying out a new mode of music promotion, reverse crowdfunding, where their fans will promote the newest album release. Check out this guest blog post below by Word Of Mouth, most recently published by hypebot.

To explain how the process works, 1000 albums are printed on vinyl and distributed amongst 100 key supporters, including more than 10 record stores nationwide, who will participate in coordinated Record Store Day distribution events. Their job is then to give their extra copies away for free, to people they believe would love the music. The thousand people that end up with the album then direct as many people as they can to our website to listen to the album and pay what they want to download it. It is available for free, but downloaders are able to donate as much as they please.

Here to “stimulate your mind juice”, this album is about you. It is designed to harmoniously combine 8 unique musicians, each playing multiple instruments, and integrating influences from an array of genres to deliver one unified message. The strength of community, self-empowerment, and action. This message is what inspired us to pioneer a new release strategy. We put the focus on the community of fans surrounding us because we believe they are the backbone. The band is only as successful as the fans supporting it. This knowledge has lead us to develop the concept of Reverse Crowdfunding. It is a way for people to be involved with the band and share in its prosperity. 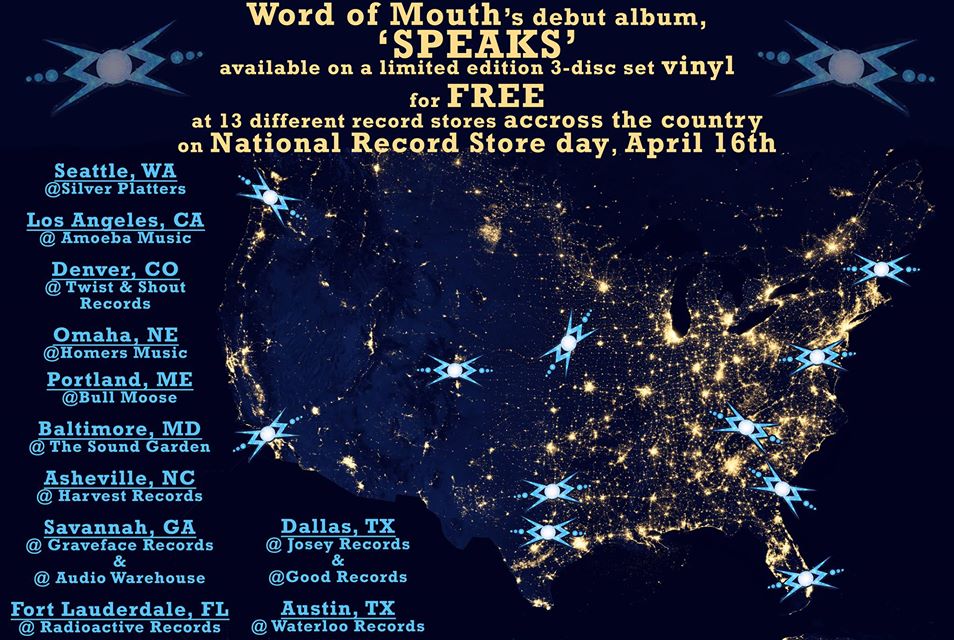 See stores above to participate!

A Guest Post from Word of Mouth published via hypebot:

"Word of Mouth, an 8-piece music ensemble from Savannah, GA, has printed a thousand copies of their record on vinyl… to give them all away for free.

Here’s the kicker; each record is a “golden ticket” of sorts. Each recipient will share the album online, directly to the world at large, and promote a donation based download release, with ALL of the donations to be split equally amongst the 1000 participants.

The current industry is beyond saturated, and forces artists to strive to be noticed, but not necessarily by the fans. Major record label spending, distribution, and promotional might are still chased as the gateways to success, even today in the “anything’s possible” digital ecosystem. Without a team, and an experienced and connected one at that, each artist is paddling feverishly up stream hoping to catch a rock for a breather and some solid ground to stand on.

The equation is even harder to balance if an act hopes to print on vinyl, a medium of music delivery that, according to the RIAA, made more money than streams last year. Due to the cost of manufacturing and distribution, creating a valuable physical product is just that much harder, when efforts to recoup costs are less clear than any time in popular music history.

Individuals and companies, new and vanguard, are finding the limelight by providing revenue models that work in 2016. Many of these efforts are tremendous, and with impressive intention, but unfortunately the fact of the matter is that some models work for some, none work for all.

And what do you do when the models you’re presented with don’t seem to fit quite right? You break them and start fresh.

We are challenging the norm, simply by making our fans our distributors.

After all, the fans are the means by which the artist earns the attention of the record labels; they also determine how long the artists are kept by the labels. Artists aren’t dropped from deals because labels believe they don’t have any hits left in them, they drop artists because the fans aren’t convinced anymore. Music, therefore, becomes less oriented around great content, art, and more oriented around music that will recoup.

We want to put the emphasis back on quality music and to reignite the personal relationship that fans should share with their favorite bands.

In a nutshell, we are building a global and connected street team, then paying them with the money that THEY help generate. The reality is that releasing an album is not a one sided effort by the band, even though Word Of Mouth has self funded the complete HF recording of their 3 disc, 180 gram, 45 RPM, Vinyl LP. Releasing this album, as all album releases should be, is a collaborative effort where the fans are the backbone and the backbone is supported. We want to treat them with the importance that they have garnered, by giving back to them accordingly through the fruits of their labor.

We reject the idea that people should be excluded from our process because they don’t have the money.

It is critical to us that we make collaboration and connection as easy as possible for our team. For this reason, we continuously look for new technology that will allow us to simplify organization and communication. We have built both web and mobile applications, as well as included IntelliPaper cards with every vinyl. The IntelliPaper cards are business cards that fold into usb drives, and autolaunch users directly to the web application when plugged into a computer.

As well, to facilitate further creative efforts, we’ve also made stems of the album available for producers, dj’s, etc. Free analog samples for them, and free publicity for us; the art of mutual gain.

Our business model aims to flip the traditional release strategies on their heads. We believe we will create a bigger splash by making this mutually beneficial for everyone. Help us prove the age-old adage; that Word of Mouth is the best form of advertisement. Help us spread quality artists and inspired music by checking out the album and contributing what you can to the campaign."