We’ve all been there. We hear a song and instantly become enslaved to its rhythm and tune. It doesn’t matter if we like it or not. Sometimes the worst songs are the ones we just can’t stop singing out loud, or hearing swirling through our minds. These little tidbits of songs, that usually last for no more than a few seconds, are called earworms. Studies from the Proceedings of the 10th International Conference on Music Perception and Cognition found that more than 91 percent of people reported having an earworm at least once a week, while about a quarter had them more than once a day. The issue scientists have is understanding how earworms occur in the first place. Due to the fact that earworms are an involuntary phenomenon, scientists cannot predict when they will take place, and therefore cannot study the brain while the phenomenon is occurring. There are therefore no concrete conclusions about earworms, which makes them even more mysterious and interesting as a result.

While nothing is definite as far as earworms go, scientists do have some ideas as to what creates an earworm. One theory is that the mind “imaginatively participates” in a song while someone is listening. This means that the brain basically gets trapped in the song, going for a ride with it until it stops playing. While the mind is enthralled by the sounds it is hearing, it subconsciously absorbs the content, which gets it stuck in your head.

Another theory is that repetitive listening glues songs to your mind. Once the brain hears the same song again and again, it begins to anticipate the next notes and words, which leads to content being trapped in our minds. We know exactly what is going to happen at every moment in the song, which assists the mind in keeping the content stuck in our heads.

A final theory has to do with the way the songs themselves are constructed. Normally, upbeat, simple, and repetitive songs are the ones getting caught in your mind, because these are the qualities that catchy songs normally have. The “catchy” factor makes the brain lodge material within itself, thereby creating that annoying earworm that you just can’t shake. 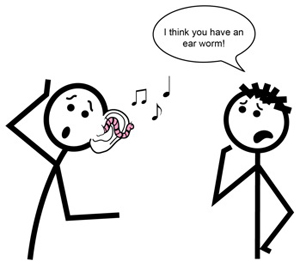 So how then, can we get rid of an earworm (Don’t worry, it is possible). Studies show that distracting yourself is the easiest way to do so. Engaging in conversation will help replace the earworm with other sounds, which will squash it with ease. Another, seemingly annoying and potentially difficult method is to listen to the song that is caught in you head over and over, which makes your mind remember the full song, as opposed to the short blurb that is stuck in your head. This will rid your mind of that annoying bit, and crush the earworm.

The feature.fm team sat down quickly and thought of the top five songs that have been caught in their heads recently.

Enjoy! Try not to get any ear worms ;)