You're talented, have a great sound, and may even have a pretty decent sized fan base on your social media accounts. But when you post your new video and promote it all over your socials, begging for exposure, why does it take over a year to rack up only a few thousand views on YouTube?

Unless you're a superstar, self promoting your content direct to your followers can be a waste of time and energy (and often $$$).

Additionally, consumers don’t click banner ads (The big platforms: Display, Google, Facebook, Twitter) and do everything they can to avoid online advertising and marketing messages. This is especially true for music promotion, where consumers defintely won't click an ad when they have no idea who you are and have never heard your music. Plus, these methods can cost upwards of $1 to $2 just for a mindless click.

It's a huge waste of time, energy, and dollars when music promoters chase these social media tactics. Following to get followers, buying fake views or plays, endless posting, and pointless inviting. Your socials are good to communicate and inform current fans of important announcements or updates, but are nearly impossible to use for acquiring signifcantly larger fan bases. This needs to happen organically.

In a previous post, I discussed the power of radio and will reiterate some of my points here:

Historically, radio has always been king for breaking songs. That hasn't changed. The way people listen to the radio, however, has drastically changed. Modern radio is digital and is everywhere on the web. It exists everywhere that music is played and is largely dependent on both computer algorithmic recommendations and human curated playlists. Whether in retail stores, at the doctor, in your car, on your phone, through your computer, and anywhere that influencers with large scale followings live online, there are endless opportunities to get your music inserted into the mix. It's all about radio airplay. These influencers are especially important. Anyone with an online following can be a modern radio DJ who helps push your music. There are more of these music influencers than ever before.

New radio DJs include the guy posting music videos to his 3,000 friends on Facebook, the venture capitalist with 300,000 followers, music curators at streaming companies, music supervisors, music bloggers, and just about anyone with an audience (influence) and an inclination to promote songs he or she likes.

Self-promotion is noise. This is different. Influencers consciously or unconsciously consider their attention capital accounts every time they post, and nobody wants their audience to shrink over a bad recommendation. As a consequence, recommendations from respected influencers (any niche) are taken more seriously.

Think about why bussinesses use testimonials and hire mega stars for endorsements. What's more credible and powerful? You telling everyone how great you are? Or influencers, who care about being geniune to their followers, telling people how great you are?

The future of marketing involves a work around for the storm of digital display ads. It's all about creating engaging, native content via targeted and motivated placements, influencers, and experts.

So when you are looking to spend your limited marketing dollars to promote your music, consider how important it is to get airplay in front of an audience inside of music streaming services where your music lives and where fans, who potentially have large scale influcencial power through big followings, can add your songs to playlists. The largest sources of music discovery include (internet) radio, playlisting, and friends and family. All three of these methods are knocked out at once when you can reach fans inside of streaming services.

If you're skeptical of spending money for people to listen to your music, then you can continue to spend money for "likes." Consider that you're paying for promotion already. Use it wisely. There is no better way to promote a song than to play it people. Using your budget to pay for exposure only increases your chances of mentions, spins, placements, or inclusions in a regular rotation via the vast array of modern radio DJs. It's far less exhausting than the social wastelands that artists invest in now.

A little self promotion for Feature.fm

I will note that with Feature.fm: 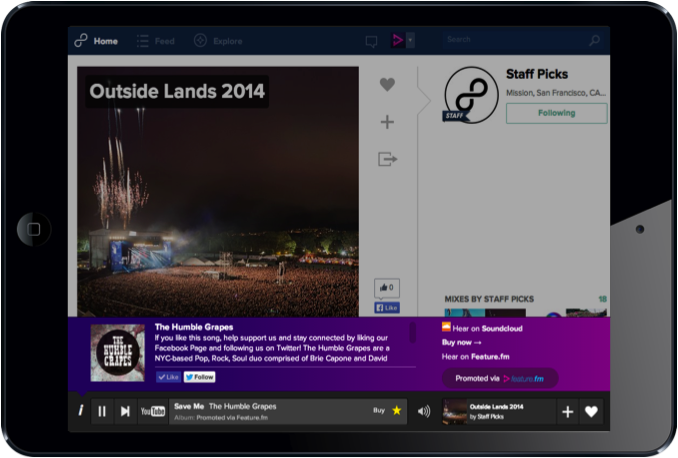