Most people at this point know about the viral video posted by Nathan Apodaca, a.k.a. @420doggface208, of him skateboarding to work, drinking out of a cranberry juice bottle, with “Dreams” by Fleetwood Mac playing in the background. It’s shown the power that TikTok has to chart a song or to increase streaming. But more importantly, it’s shown how music culture can help to blow up a video. It isn’t a coincidence that this video in particular blew up- Fleetwood Mac was already popular in certain niches on TikTok before the video was posted. The song “Dreams” had been a popular song on TikTok for months. TikTok users love to show off their varying music tastes and the bands that they’re fans of, and Fleetwood Mac has been spreading through word of mouth since March. The video posted by Apocada was just a catalyst bringing the “Fleetwood Mac trend” to the forefront. The comments of the video below from June help to paint a better picture of how Fleetwood Mac fits in with the music taste of teenagers. Many of the top comments name Fleetwood Mac as one of their favorite artists, alongside names like Tyler, the Creator, 100 Gecs, Clairo, Still Woozy, Rex Orange County, Finneas, and other popular and relevant artists.

How Did the Audio Grow?

There are two different “Dreams” audios that have been popular on TikTok. The first audio, which first became popular around March, was used during the whole summer. Looking at a chart of Spotify streaming numbers for Fleetwood Mac, there is a strong correlation between the audio becoming popular on TikTok and an increase in streaming on Spotify.

Other than having good music, what was it about Fleetwood Mac that made them so popular on TikTok? Certain trends that have been emerging on the app- like skateboarding, rollerskating, fashion, spirituality, and “vibes” all are in line with Fleetwood Mac’s music and image as a band. When looking at the top 100 videos under the first “Dreams” sound, 12 were of people dancing and enjoying themselves, 9 were about rollerskating or skateboarding, 8 were about spirituality, and 8 were of people making art. Fleetwood Mac’s culture is in line with emerging culture on TikTok, so it makes perfect sense that this generation would be attracted to the music. It also makes sense, then, that a video of a non-Gen Zer with a vibe that matches that of Gen Z would go viral.

Another trend that was popular before Apodaca’s video was around a mashup with the song “The Chain”. The song “XIX” by the artist Kismet (using the lyric “molly rocks in my green tea”) has been mixed with a few different songs to show off an outfit, as shown below. Each mashup matches the aesthetic of the song being used. The original mashup was with the song “Genocide” by the artist Lil Darkie and has 1.6 million videos.

Another popular mashup of “Molly Rocks” was with Tyler, the Creator’s song “Best Interest”, and the trend was to dress according to Tyler’s aesthetic. The mashup has 190.5k videos.

get ready with me

In August, a Fleetwood Mac twist on this trend took off, and showed off outfits with 70s or “hippie” vibes. Over 11,000 were made with this audio.

Fleetwood mac is everything.

With his video, Apocada brought the culture of Fleetwood Mac in TikTok to the mainstream. Top comments like “WHY IS THIS SUCH A VIBE”, “he is the main character”, “if vibe was a video”, “vibes unmatched”, and “I wanna be you when I grow up” all give context as to why the video blew up. Soon after his video was posted, both Mick Fleetwood and Stevie Nicks joined TikTok. Mick Fleetwood recreated Apocada’s video, and skateboarded while drinking cranberry juice. Stevie Nicks sang along to the song while putting on rollerskates. Tens of thousands of users made their own version of the video, skateboarding down their streets with things like coffee, cereal, candy, and of course cranberry juice. Apocada himself continues to make videos and has almost 5 million followers. Someone older than Gen Z encapsulated the spirit of Gen Z culture- and general youth culture- effortlessly in one video.

How Feature.fm's "Use My Sound" button helps you go viral on TikTok

The popularity of this video shows that you don’t need a dance for your song to become popular on TikTok. Feature.fm provides a “Use my Sound” option in your Smart Link, so fans can click right to TikTok and your song will pop up as shown below.

Feature.fm's "Use my Sound" on TikTok button: 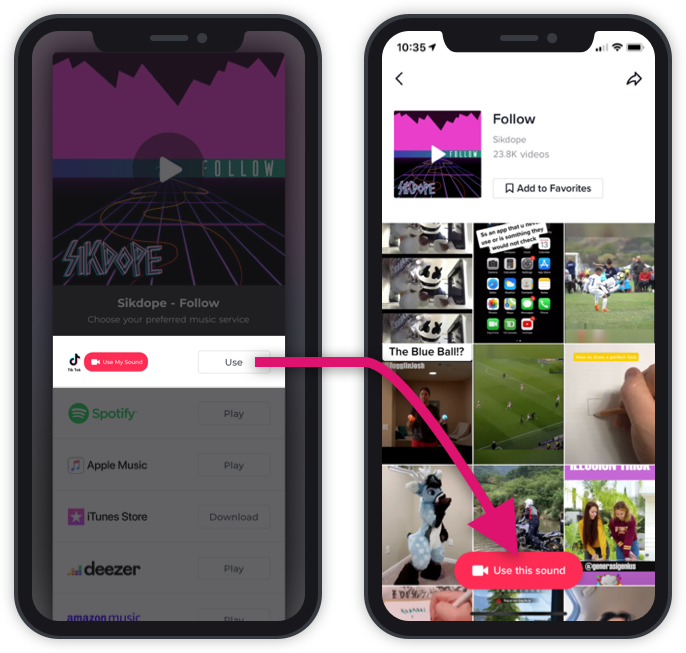 Our Help Article can help you get setup with the "Use my Sound" feature. It's is a great way to remind your fans to use the sound on TikTok without specifically telling them to. Just making fun videos with the sound, and trying to embody the vibe of the song in the TikTok video, can do much more than making up a TikTok dance.