In summer of 2019, Headon began using his unreleased song “Grace” in the background of his TikTok content filled with relatable themes about relationships. His videos got much more engagement, and viewers flooded his comments asking him to release the song.

Here’s an example of one of these videos:

After he used these videos to build anticipation around the single, he released it on digital streaming platforms with a music video of the user generated TikTok content fans made using the song.

The video below is an example of how he advertised the single a few days after its release.

Headon’s first video to get over 200,000 likes was of him sitting in his bed, with the caption “listening to my own song on my bed until I’m viral day 1”. The sound was his next upcoming single, “Clean Me Up”. The title of the sound on TikTok was “THOMAS HEADON ON SPOTIFY” to clearly direct viewers to his music.

help one of the boys out and use my sound :( ##foryou ##foryoupage ##fyp ##featureme ##trending

He reposted this video, and versions of this video several times over the following weeks. Tons of comments mentioned the posters of Rex Orange County, The 1975, and Tyler, the Creator on his wall in the background of the video. After the video above was posted, his following on Spotify began to spike even though “Clean Me Up” hadn’t been released yet. This sudden increase could have happened because the song was unreleased, and listeners needed a reminder when it came out.

(Soundcharts, Thomas Headon Fan Base over time on Spotify)

This was the first time his fanbase began to grow significantly. Headon built hype and increased Spotify engagement by promoting his music prior to releasing it. By the time “Clean Me Up” was released in late November, enough people were paying attention to him. He was placed on Spotify’s New Music Friday, and his Spotify streaming numbers doubled after one week. For the next few months, he continued to create videos with relatable content while using his songs as the TikTok sounds.

Headon continued to post cover videos of popular TikTok songs, including “Say So” by Doja Cat and “Roxanne” by Arizona Zervas. One of his covers of “Roxanne” got over 450,000 likes, and a cover of Rex Orange County’s “Corduroy Dreams” got over 200,000 likes. Comments complimented his voice and compared him to Harry Styles. After a lot of these comparisons, he also covered “Cherry” by Harry Styles.

This past March, Headon and his team experimented with videos similar to the one below.

Here, he identified key similar artists who have huge fanbases, like Rex Orange County, Clairo, Harry Styles, The 1975, Billie Eilish, and Frank Ocean. He made three other videos like this, and the four of them together gained over 347,000 likes. The videos also used his own songs in the background. These videos had increased engagement because they grabbed the attention of the fans of these artists. For instance, if the video comes on the for you page of a Frank Ocean fan, that fan will be engaged when they see Ocean’s name pop up. They’ll then automatically listen to at least 15 seconds of Headon’s song. He used this strategy to promote his song “Butterflies”, again prior to its release in late March.

In June, Headon began uploading videos with a cardboard cutout of Harry Styles in the background, as shown in the video below.

It increased his engagement so much that he left the cutout in almost every one of his videos until the end of July. The graph from Soundcharts shows just how much this affected his overall TikTok engagement. There’s also a correlation between this engagement and an increase in Instagram and Spotify followers. (His single “Loving You” was released on June 20 and was placed on Spotify’s Lorem playlist, which could have also contributed to the rise in Spotify engagement.)

Some of the more popular videos had a majority of top comments mentioning the cutout. This large amount of comments led the algorithm to push the videos to even more viewers. Some of the videos had hundreds of thousands of likes. Other videos with the cutout had captions that were relevant to TikTok trends. For instance, one popular video had text saying “welcome to harry styles and alt indie song side of tiktok. interact with this to stay:)” and again used Headon’s song as the sound. This built up momentum leading to his EP release on July 24th.

Headon and his team’s incorporation of crossover artists in his TikTok videos is what gave him the extra push needed for his videos to go viral. His use of TikTok as a promotional tool is a great example of how artists can use social media to market their music, and eventually use these lookalike tactics.

Finding Your Own Lookalike Audiences

How can you find lookalike audiences to replicate these techniques? Social media and the Internet have made it extremely easy to find artists with crossover fanbases. Music fans pride themselves on sharing their tastes in music, and it’s common for people to list their favorite artists in Tweets and in TikTok comments and videos.

Finding these audiences can be as easy as looking up your artist’s name on Twitter, and scrolling through to see who else they’re named with. If your artist is still just starting out, find just one similar, popular artist, and look them up instead.

An example of using this strategy for Thomas Headon is below.

how similar is our music taste

(“Moots” means mutuals, when two accounts follow each other.)

Other resources like Chartmetric and Music-Map can also help you easily navigate these fanbases. An example of Thomas Headon’s Music Map is below. 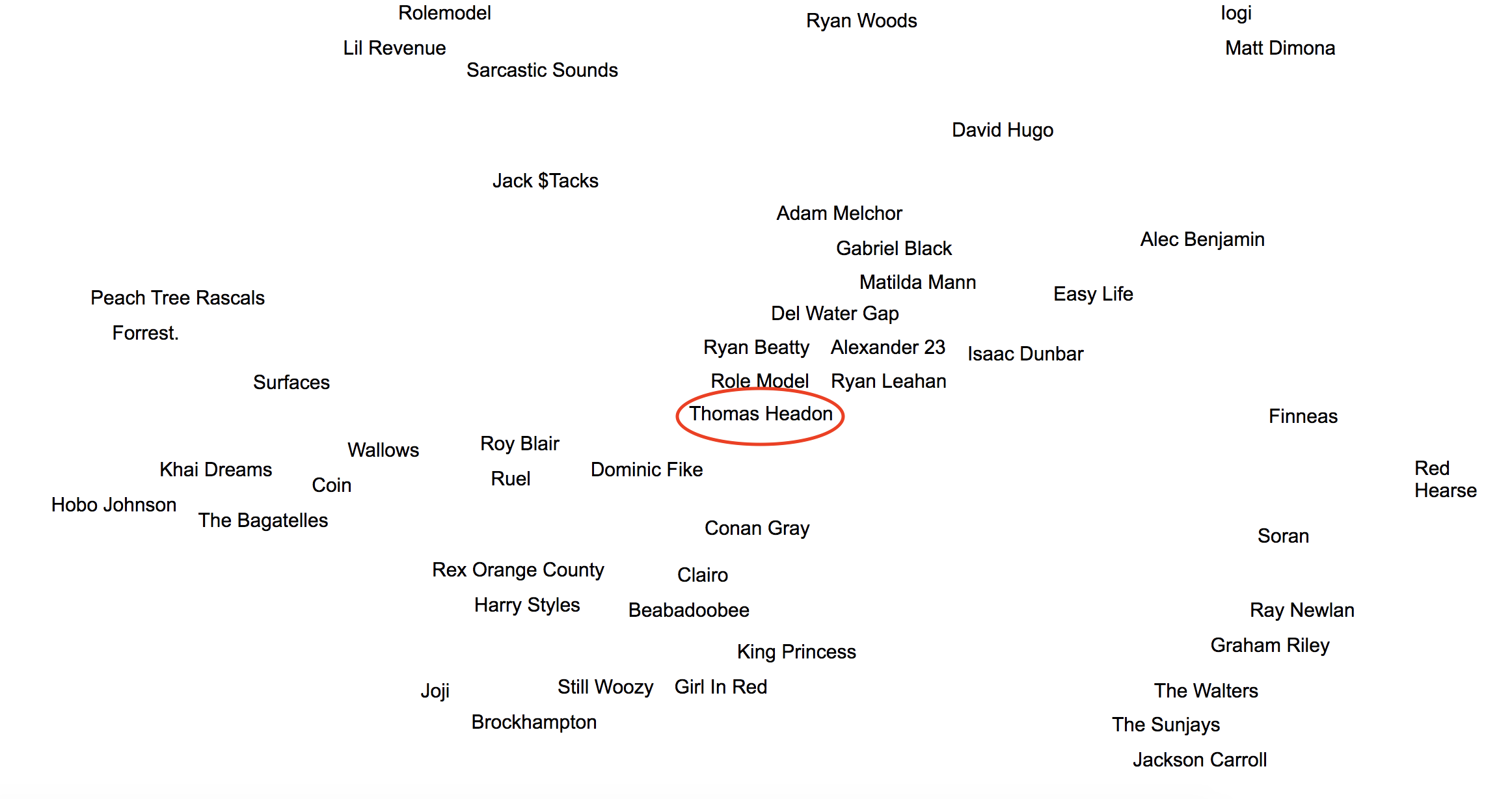 The next step is to target those similar artists as in Thomas Headon’s case. On TikTok, this can be done by using a similar artist’s sound, by having certain posters in the background, or by mentioning these artists in videos.

You can replicate Thomas Headon’s strategy with Feature.fm by building lookalike audiences through your Facebook pixel and/or TikTok pixel. Then remarketing to those fans to promote your new release.

You would set up your ad so you’re targeting fans of the artists’ pages that you’d like to put your music in front of.

You can do this in the section of targeting, so if you’d selected The 1975 as a target you’d select fans who follow or are interested in The 1975. 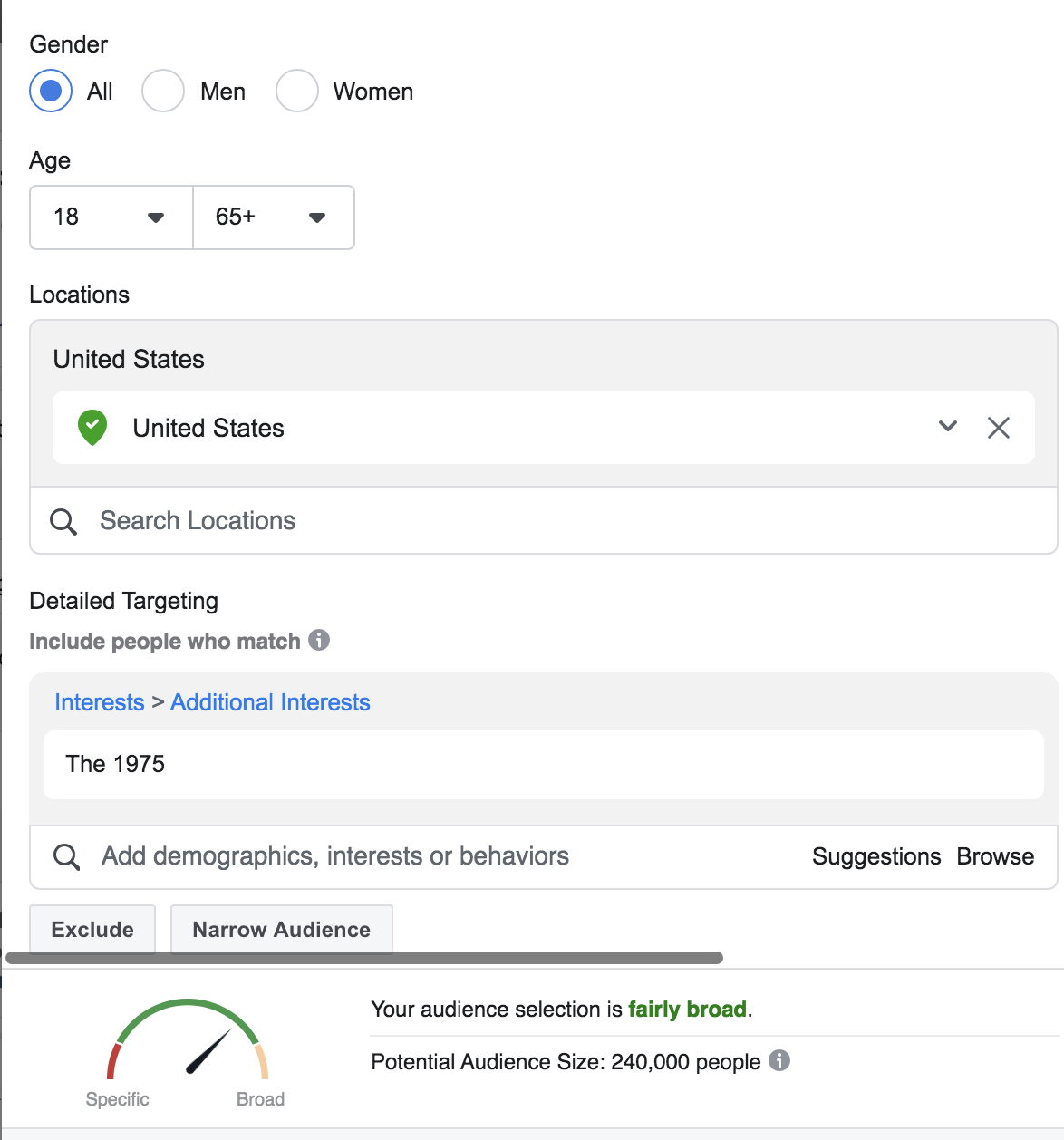 Then once you have your targeting selected you’d run your ad and make sure to have your Facebook pixel in the Feature.fm link you’re using.

For TikTok, you’d set up the TikTok pixel through Google Tag Manager. If you don’t know how to set this up you can view it here.

The strategy would be the same as Facebook Business Manager in targeting the interests of fans of similar artists. For example: 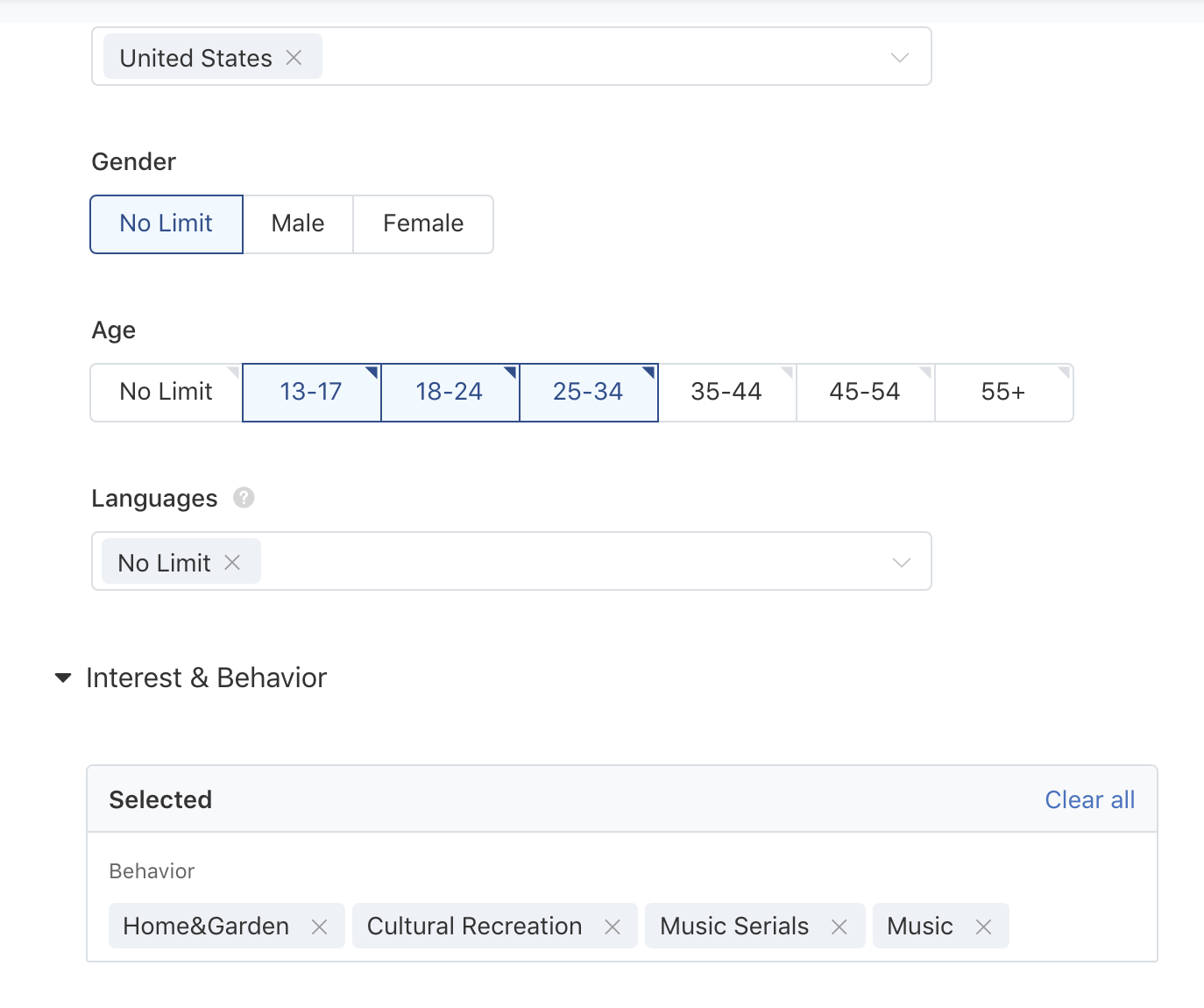 The one difference here is running different ad variations, so the sound being used is one of the songs from your similar artists.

For example if your similar artist is Lauv, you would select a recent song by him as the sound in your ad. When fans click on it, they have the option to click to your release on Spotify. 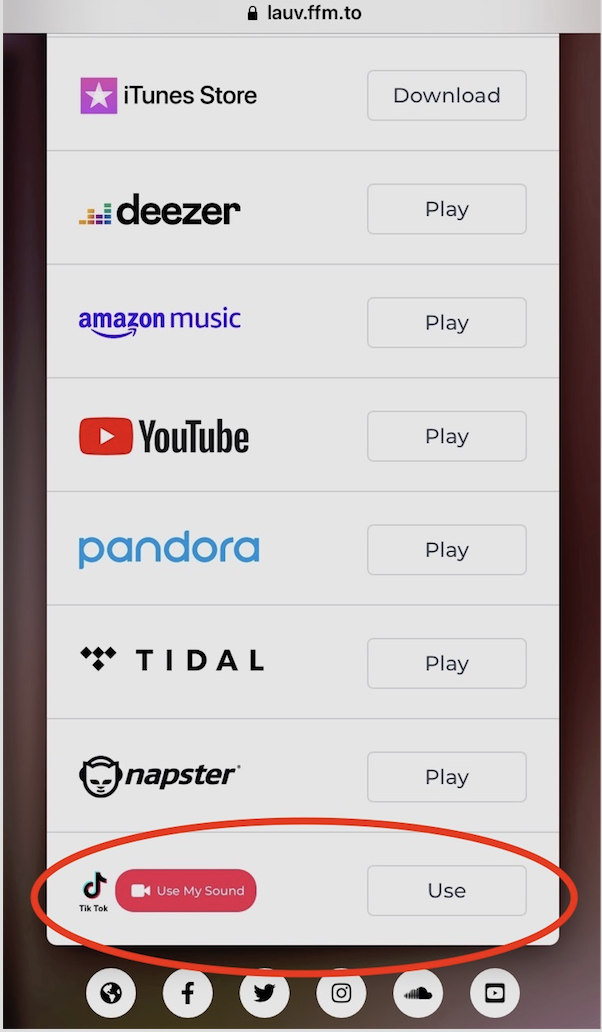 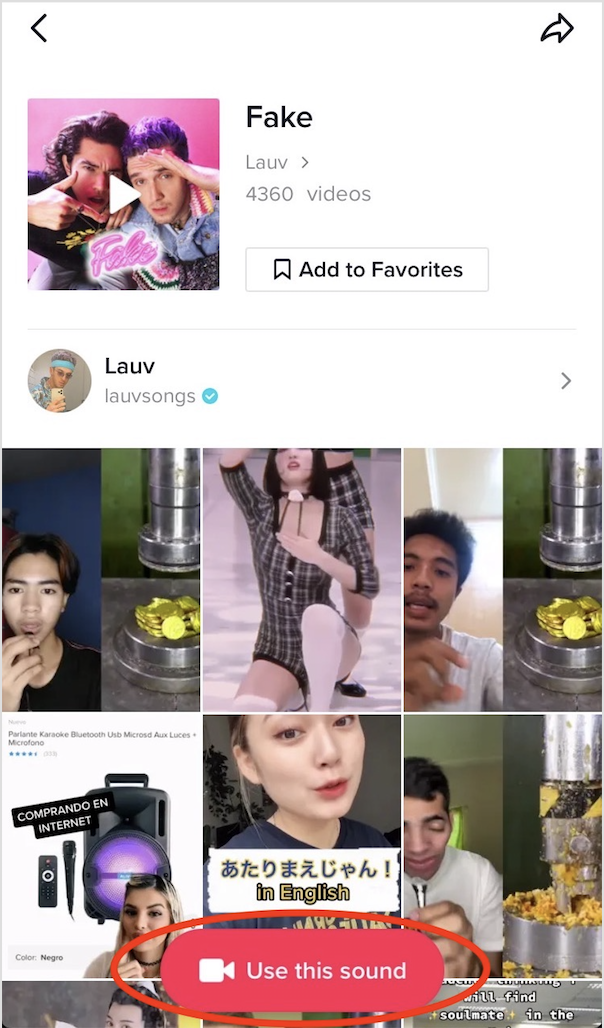 For all these examples, we suggest linking to one DSP directly with no landing page as that will cut down on the amount of fans who directly go to the streaming service. It is a safe assumption that if you’re on TikTok and promoting an ad, Spotify is the best DSP to link to directly.

Learn how to create a Short Link on Feature.fm here.

Social media makes it easy to find and target lookalike fanbases. Thomas Headon’s case shows us that you don’t need a viral song on TikTok to use the app for marketing and promotion. Traditional marketing techniques, adapted for modern trends, can still be just as effective especially when you’re using Feature.fm.