For the most part, artists invest most of their budget on the production of their music. After you put a ton of time and money into creating a song or album, it comes time to release the amazing, musical art that you created. But after your release, you might start to ask yourself why your music doesn't get played in streaming services? Why is no one listening?

Your song is a needle in a haystack

No one really knows your song exists. Releasing a song or album is not enough in itself to get noticed unless you are already a superstar.

Look at how much music is out there. The supply of music today is greater than it's ever been thanks to the easy access to distribution. This means that your song is just one of millions.

Think about how much music is out there. How many songs there are that artists want fans to listen to. The realistic amount of time that each fan can actually listen to music doesn't help your cause.

It takes a little something more to actually get noticed.

Just because you spent countless hours and dollars in the studio, let alone the amount of years of practice it took you to perfect your musical talent, doesn't mean you should just expect money to start rolling in once you release your songs.

As an analogy, look at app developers. App developers spend years creating apps after the years of education it took them to learn how to code and develop. After all of this effort, they release their apps for free and more times than not, no one downloads it or uses it.

Hard work is vital to make it, but in this world, don't think the hard work stops once the album is posted on your socials and available in streaming services.

Promotion is just as important as production

Here is the key to getting noticed. Your promotion! Marketing, advertising, PR. This is what gets you visibility after you've created a great product.

Businesses spend tons of money on marketing and promotion. Creating a great product means nothing if no one knows about it! It's the same with your music.

Invest in your promotion and marketing. Focus as much as possible on getting people to hear your music. It's all about airplay and exposure. If you truly have great music, it will pay off and people will keep listening. If you believe in your product, then it's worth the investment.

Basically, you want to make your song look like this needle in the haystack: 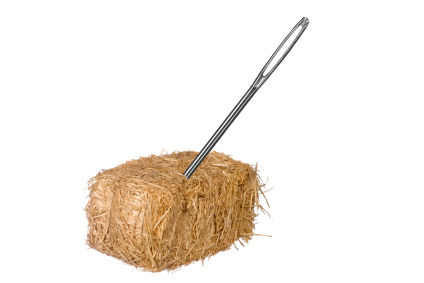 Have other ideas for getting songs noticed in the haystack? Let us know in the comments